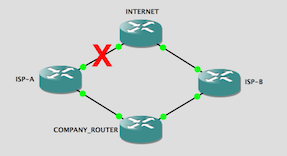 In this post I’m going to look at how we can solve a WAN failover scenario when we have a default route learned from both of our service providers and a reachability problem via our primary ISP.

In this scenario, ISP-A has been having internal problems several hops into their cloud from our edge. This means that though the BGP session with our primary ISP never drops and therefore no failover action occurs, routing to the internet still breaks.

We need to configure ISP failover using only what we have. We aren’t able to take a full feed from our ISPs, and our solution can’t require manual intervention.

For this scenario, we have the following limitations:

For our topology, we have the following considerations:

This is our topology: 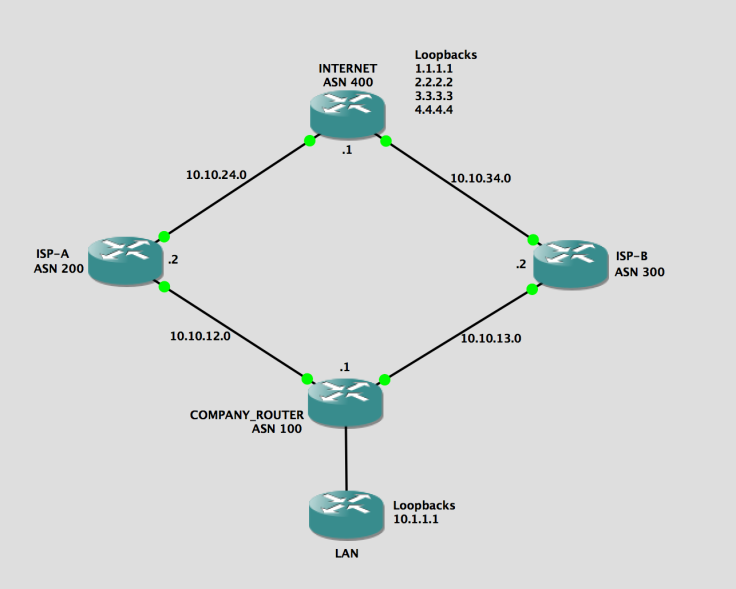 Apply this route-map inbound on the neighbor statement for ISP-B.

Now we need to prepend additional autonomous systems to our advertisement to ISP-B so that return traffic from the internet prefers the path to us through ISP-A.

Make sure to apply this route-map outbound on the neighbor statement for ISP-B.

This is enough configuration to prefer ISP-A and to have failover to ISP-B if the BGP session with ISP-A fails. But this kind of failover is triggered by the loss of the BGP session which would be caused by our router and the ISP router not being able to communicate with each other for any reason.

Our situation is a little different, though. When ISP-A has problems several hops away from us into their cloud, we don’t lose our session with ISP-A’s router. COMPANY_ROUTER and ISP-A  are both up and communicating, so despite there being a routing problem just beyond ISP-A’s PE router, we keep it as the next hop for our default route. As far as COMPANY_ROUTER is concerned, nothing is wrong.

There are a few ways to accommodate this type of failure, but remember that there can be no manual intervention and we can’t ask our ISPs for a full feed.

We start by configuring the IP SLA and track object. For this lab I’m pinging one of the loopbacks on INTERNET, but in production you can ping the last hop in your provider’s cloud before it goes to the next ISP or something reliable on the internet that you trust. Notice that my source is the interface on COMPANY_ROUTER connected to ISP-A.

Now we configure the script to shut down the peer.

This EEM script tracks reachability to 2.2.2.2 through ISP-A. If reachability is lost because of an upstream ISP issue, the script runs through the commands above to shut down the neighbor forcing a failover to ISP-B.

To revert back to ISP-A, the inverse action is required in a second EEM script.

You can also add a log message as a fifth action, but for this example I’ve kept things very simple.

When we simulate the upstream outage by shutting down interface gig 0/0 on ISP-A (the far end from us), the track object goes to a down state triggering the script and failing over our default route to ISP-B.

Now, even when we’ve failed over to ISP-B, COMPANY_ROUTER will still be checking for reachability through ISP-A.

When the issues with upstream routing are resolved, the pings to the track object through ISP-A will succeed triggering the second EEM script to revert to ISP-A.

In order to speed up slow convergence after the failover you can adjust your BGP timers on a per-neighbor basis or globally on the BGP process. This is based on your needs and your overall topology.

Since this is a very simple topology using only a default from each ISP, I reduced the timers global timers a lot. How much is too much is debatable. It’s something to experiment with and possibly talk to your ISPs about.  Just remember that applying new timers requires a hard reset of the sessions causing a brief outage.

A better way to do this would be to take a full feed from our ISPs and configure BGP accordingly, but in this case that wasn’t an option. If you have other ideas of how we could have solved this scenario, please let me know in the comments or tweet them out. One thing I’ve learned over the years is that there’s often more than one right way to do something!